In pictures: Mass held to commemorate the 25th anniversary of King Baudouin’s death 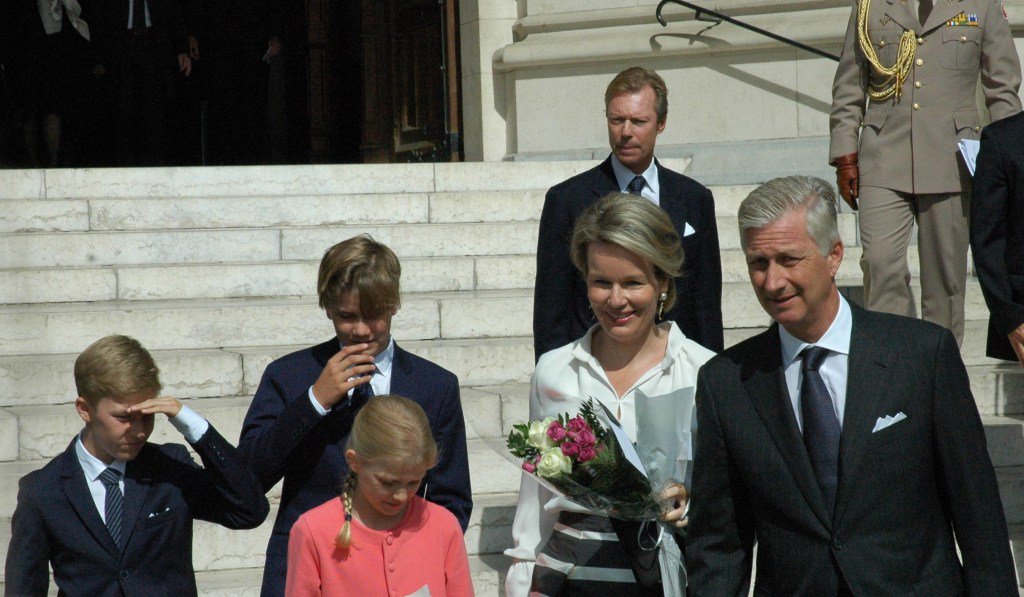 This morning the royal families of Belgium, Luxembourg and Liechtenstein got together to attend a mass commemorating the 25th anniversary of the death of King Baudouin of the Belgians. Even though many royals were present, some important family members notably absent.

This morning, a special mass was organised to commemorate King Baudouin of the Belgians. The fifth King of Belgium died unexpectedly 25 years ago while on holiday in Spain. Therefore, a mass was held at the Church of Our Lady in Laeken in Brussels. It was Cardinal De Kesel who presided over the ceremony.

Princess Léa of Belgium, the widow of Prince Alexander who was a half-brother of King Baudouin, arrived very early at the church. She said she had “very warm memories” of King Baudouin.

Princess Margaretha and Prince Nikolaus of Liechtenstein arrived first with their three children Maria-Anunciata, Marie-Astrid and Josef-Emmanuel. Princess Margaretha is the daughter of Grand Duchess Joséphine-Charlotte of Luxembourg, the sister of King Baudouin. They were followed by Prince Guillaume and Princess Sibilla of Luxembourg and three of their four children Prince Paul-Louis, Prince Léopold and Princess Charlotte. Prince Guillaume is also a child of Grand Duchess Joséphine-Charlotte and Grand Duke Jean and thus a cousin to King Baudouin.

Unexpectedly was the absence of Grand Duchess Maria Teresa. A source close to the palace confirmed to Royal Central’s Europe Correspondent, Laura Dekkers that the decision of the Grand Duchess not to come was made yesterday. They also confirmed that the Grand Duke and his son arrived early this morning in Belgium and will be leaving in the afternoon.

Then, Princess Astrid of Belgium, the sister of King Philippe, arrived with her husband, Prince Lorenz and three of her children and her daughter-in-law. She was followed by King Philippe’s brother, Prince Laurent.

A few minutes past eleven, all the guests had arrived and the service could finally start. Cardinal De Kesel talked about King Baudouin as he said: “He is an example, not only to you sir, you who is his successor and in the exercise of your service, but for all of us. No matter which life, state, or responsibilities we have. Our example to be right-minded people.”

The service lasted about 1 hour and 30 minutes. Following the service, the Royal Family and the other guests gathered at the Royal Crypt where all the former Kings and Queens of the Belgians who have passed away are buried. The King and Queen laid a wreath at the grave of King Baudouin and Queen Fabiola.

After the mass, the members of the royal families took the time to have a chat with the public who had gathered to show their support for the Royal Family.

Europe Correspondent, Laura Dekkers was able to ask a few questions to members of the Belgian Royal Family. She asked Queen Mathilde how her daughter was doing at school in Wales. Her Majesty said: “Good, good. She’s doing well. It’s different without her at home.”

Princess Astrid and her family were very talkative as they left the church and ended up being the last ones to leave. Princess Astrid said about her uncle, King Baudouin: “He was more than a father to me. I loved him very much. He was the father of our entire family. He protected us.”

Our Europe Correspondent Laura Dekkers asked the Princess: “How is your granddaughter doing?” Princess Astrid talked about her two-year-old granddaughter, Anna Astrid: “She’s doing very well. She’s here in Brussels now. She’s around this big and she’s a funny little character. She knows what she wants and says when she doesn’t like it (laughs).”

Also, proud father Prince Amedeo (son of Princess Astrid) and Princess Elisabetta talked about their daughter, Anna Astrid when asked about her. They said: “She’s doing very well. We try to come to Brussels often to see Grandma, and Grandma (Princess Astrid) also travels from time to time to our home in Bazel (Switzerland).”

Prince Laurent was not available for a conversation. He only shook some hands of the public and then headed out as soon as he could. Meanwhile, Grand Duke Henri and Prince Louis were in conversation with the ex-wife of Prince Jean of Luxembourg (Henri’s brother), Hélène.

The two heads of state were also seen talking: Grand Duke Henri of Luxembourg and his cousin, King Philippe.

Noticeably absent were King Albert and Queen Paola of the Belgians. The brother and sister-in-law of King Baudouin did not give a reason for their absence at the commemorative service. It is believed the couple is still on holiday abroad.