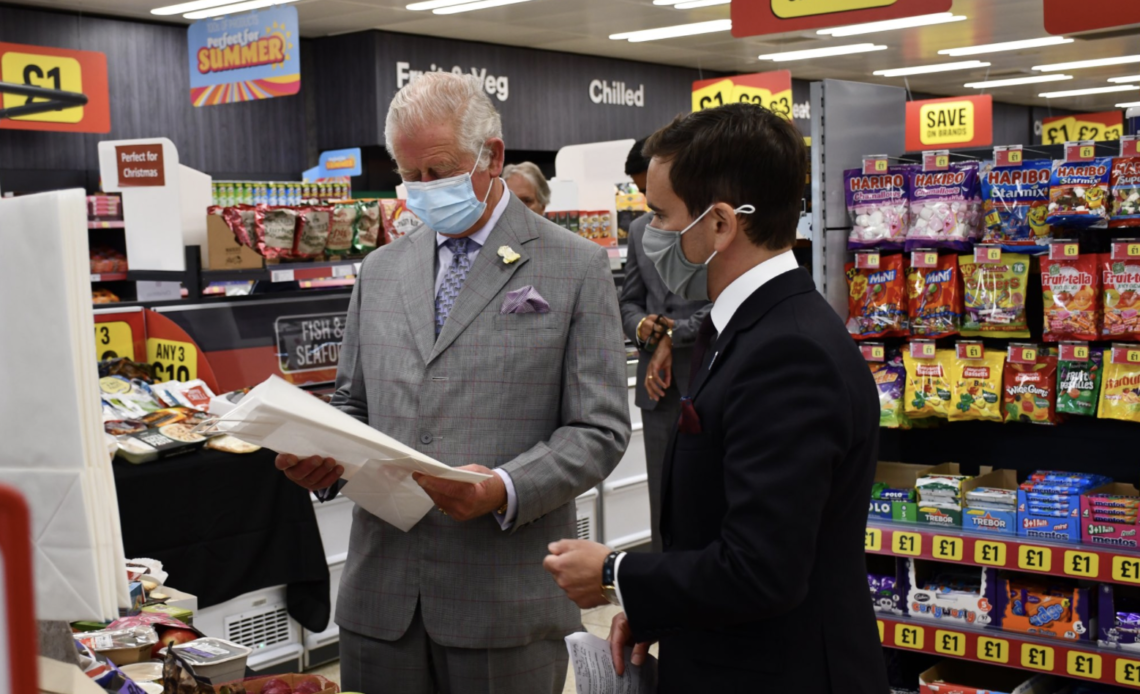 The Prince of Wales is probably the last person shoppers would expect to see in the frozen foods section of a supermarket, but Iceland employees welcomed him to their headquarters in Wrexham today to celebrate the company’s 50th anniversary.

Prince Charles and the Duchess of Cornwall are in Wales for their annual week of engagements there, and the Iceland tour kicked off Charles’s busy schedule.

The environmentally conscious heir to the throne was especially interested in Iceland’s sustainable initiatives, such as their goal to remove all plastic packaging from the Iceland own-label range by the end of 2023. Charles’s first stop was Iceland’s reverse vending machine, which rewards users for recycling.

While touring their onsite store, the company’s Head of Sustainability, Stuart Lendrum, showed Prince Charles the latest range of Iceland’s plastic-free packaging, including their plastic-free bags.

Further sustainability projects and community issues were on the agenda when the Prince of Wales visited the company’s boardroom and offices to meet staff and learn more about their initiatives over the past year. Iceland was the first supermarket to launch priority shopping periods for the elderly and vulnerable after one of their supervisors in Belfast came up with the idea.

Moving on, the Prince of Wales stopped by the Iceland Development Kitchen where he sampled some products and discussed fish sourcing. He then toured the photographic studio and the cold store, which was opened by Prince Charles 34 years ago.

Clarence House shared a throwback photo of a young Prince of Wales visiting Iceland HQ along with a similar photo snapped during his visit today.

Charles capped off his visit by unveiling a plaque in the company’s reception area to commemorate the occasion.

Iceland, which will open its 1000th store in Newport this week, was founded in 1970 by two young Woolworths deputy store managers, Malcolm Walker and Peter Hinchcliffe. Malcolm suggested that they sell loose frozen food – an idea he borrowed from a department store in Leeds; his wife Rhianydd came up with the name ‘Iceland.’

The Princess Royal opened the 500th Iceland store in Clapham in 1991.