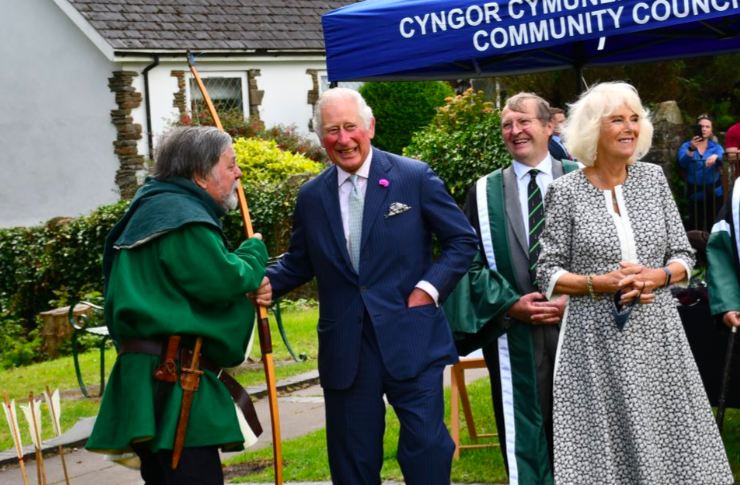 This week, the Prince of Wales and the Duchess of Cornwall are visiting different communities in Wales, for their annual Wales Week. Today they visited the town of Llantrisant to view a newly restored building, the Llantrisant Guildhall Heritage and Visitor Centre.

As they approached, they met representatives from the Guildhall. They also enjoyed seeing primary schoolchildren and the local choir singing outside.

The Llantrisant Guildhall Heritage and Visitor Centre was originally built in 1346. However, it was rebuilt in 1773 to Georgian taste. It has been used for a number of different purposes throughout the centuries. After being rebuilt, it was used for governance with a corn market on the lower floor and a courtroom on the upper. It was also used as the town’s first school, and for the Baptist movement in the 18th century.

While they were touring the Guildhall, they met with different community and school groups. The Centre will now serve several different purposes, including a museum with exhibitions on the town’s history, an activity centre for school groups, and hosting many different events like history talks, ghost walks, concerts, and more.

The Duchess learned about one of the activity areas from local children, as they showed her how some of the interactive elements worked.

After visiting the Guildhall, the couple learned more about Llantrisant’s history. They met with an archer to demonstrate period-specific archery skills. Llantrisant longbowmen fought at the Battle of Crecy in 1346, a crucial battle in the Hundred Years’ War, and one of the exhibitions in the Guildhall is dedicated to the archers.

The building was largely derelict and out of use by 2010. Two members of the Llantrisant Town Trust, Martin Hooker and Dean Powell, spearheaded a fundraising campaign to restore the Guildhall back to its Georgian origins. In addition to the campaign, the project also received funding from the National Lottery Heritage Fund, the Welsh Church Act Fund, the Foyle Foundation, and the Garfield Weston Foundation.