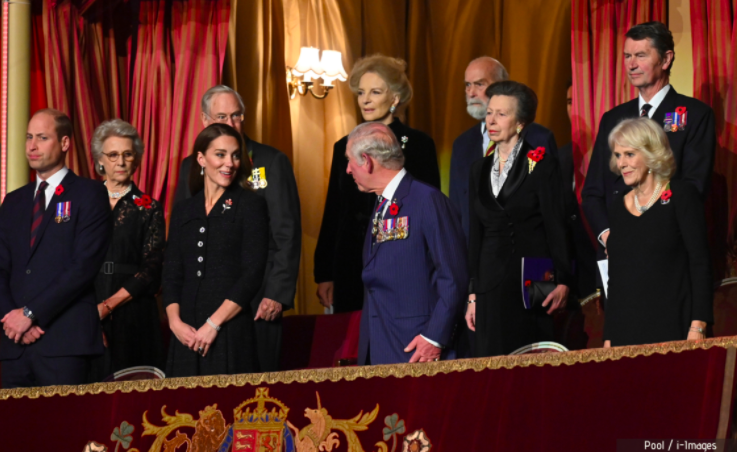 The Prince of Wales and the Duchess of Cornwall led the British royal family at the Festival of Remembrance at London’s Royal Albert Hall to pay tribute to fallen soldiers who have served Great Britain and the wider Commonwealth.

Members of The Royal Family in attendance included the Duke and Duchess of Cambridge, the Earl and Countess of Wessex, the Princess Royal and Sir Tim Laurence.

Also present were the Duke and Duchess of Gloucester, the Duke of Kent, Princess Alexandra and Prince & Princess Michael of Kent.

For the first time in years, Her Majesty The Queen was absent from the event due to recent doctor’s orders telling her to rest. The palace has confirmed those orders are not related to the global health crisis.

This year’s event marked 100 years since the collective national Remembrance traditions and tributes came together for the first time. During the festival, different artists performed poetry and music alongside the Band of HM Royal Marines, the Royal Air Force, the Bach Choir, and the Soul Sanctuary Gospel Choir.

During the festival, the 30th anniversary of Operation Granby was acknowledged. The largest deployment of UK forces since World War Two. Fallen veterans were paid tribute to as were current members of the Armed Forces who have been deployed to Afghanistan as part of Operation Pitting. The British military operation to evacuate British nationals and eligible Afghans from Afghanistan following this year’s Taliban offensive.

On 14 November, Remembrance Sunday, senior members of the royal family will attend a national memorial ceremony at the Centopath in London. During the ceremony, Royal Marine buglers will sound “The Last Post” as wreaths are laid by The Queen, other members of the royal family, political party leaders, and significant military figures and civilians.

A two-minute silence will also be featured as part of a short religious service followed by a march-past including hundreds of military veterans.