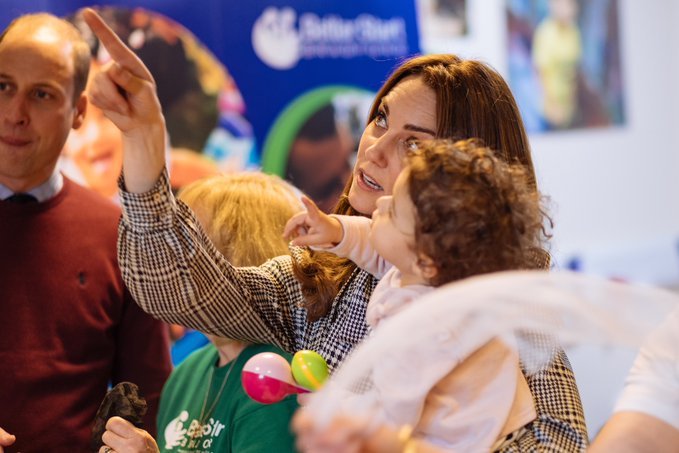 The Duchess of Cambridge received special support on the last full day of her 5 Big Questions survey when her brother and mother posted about it on social media.

Kate’s younger brother, James posted on his Instagram, which he uses mainly to post pictures of his dogs, urging people to take the 5 Big Questions survey.

The photo was of him as a young boy with Gibson, his grandparents’ British bulldog, but the caption poked fun at his tendency while also complimenting Kate.

“This isn’t a post about dogs…brace yourselves….BUT it’s in huge support of my wonderful Sister’s ‘Early Years’ initiative to ask ‘5 big questions on the under fives.’

“[I]f you have 5 minutes & live in the UK join the biggest conversation on early childhood. Like me even if you don’t have children, your own experiences will help invest in the future of the next generation.”

Kate also received support from Party Pieces, the partyware and giftware company owned by her parents Carole and Michael Middleton, who posted about the survey on all of their social media platforms encouraging people to fill out the survey.

“If you haven’t already, there’s just a couple of days left to take part in the #5BigQuestions survey,” the Party Pieces posts appeared on Facebook, Twitter, and Instagram Stories.

“Please join the conversation on the hopes & aspirations for UK children. It takes just 5 minutes – just visit the link before Friday 21st February and have your say!”

The Duchess of Cambridge launched the 5 Big Questions on the Under 5s last month to bring together “the thoughts of individuals, organisations and businesses so that we can build the healthiest generation in history by giving every child the best start in life.”

Over the past month, she has visited children-focused organisations in England, Scotland, Wales, and Northern Ireland in support of the survey; and earlier this week, she appeared in a rare Instagram video to promote it. Over 200,000 people have completed the survey.

“Parents, families, and carers are at the heart of raising the next generation, and that’s why I felt so passionate about listening to them and listening to your thoughts and your views on how best we can support you going forward. That’s why I’ve launched the ‘5 Big Questions,’ to hear from as many people from society as possible.”

Global polling and survey firm IPSOS will compile the results of the 5 Big Questions and the Royal Foundation will use the results to inform Kate’s work.