Prince William cheers on the Lionesses with help from Princess Charlotte 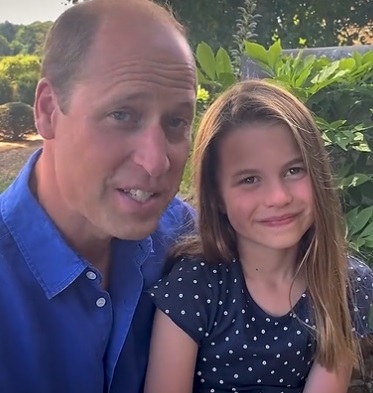 A little princess cheered on the Lionesses hours before their Women’s Euro win at Wembley Stadium on Sunday, joining in the chorus of royals who’ve shown their support for England’s women’s football team.

On Sunday morning, ahead of the football final between the Lionesses and Germany, Kensington Palace shared a video of the Duke of Cambridge and Princess Charlotte wishing luck to the Lionesses.

“We both want to wish the Lionesses the best of luck tonight. You’ve done amazingly well in the competition, and we’re rooting for you all the way,” William said in the video.

Princess Charlotte, who is a confirmed goalkeeper for her local team, was speculated to be attending the final with her father, but William, who is President of the Football Association, attended the match alone at Wembley Stadium, tweeting, “Let’s go @Lionesses, good luck #WEURO2022.”

Tweeting just as the match ended and the Lionesses defeated Germany 2-0, William signed a personal tweet: “Sensational. An incredible win @lionesses and the whole nation couldn’t be prouder of you all. Wonderful to see history in the making tonight at Wembley, congratulations! W”

He tweeted again, quoting the Lionesses’ “WE HAVE DONE IT” with “Yes you have and you’ve inspired a nation too.”

William wasn’t the only British royal to cheer on the Lionesses. The Prince of Wales and the Duchess of Cornwall tweeted, “Congratulations to the victorious @Lionesses!

“Your teamwork, determination and sportsmanship will inspire a generation. You have made us all proud. #WEURO2022.”

The Queen sent out a congratulatory message as soon as the match ended: “My warmest congratulations, and those of my family, go to you all on winning the European Women’s Football Championships. It is a significant achievement for the entire team, including your support staff.

“The Championships and your performance in them have rightly won praise. However, your success goes far beyond the trophy you have so deservedly earned. You have all set an example that will be an inspiration for girls and women today, and for future generations. It is my hope that you will be as proud of the impact you have had on your sport as you are of the result today.”