How much has the Duchess of Cambridge spent on clothes in 2017 so far?

Last year, it was reported that the Duchess of Cambridge spent over £174,170 ($214,788.19) on clothing. The number seemed astronomical and many people jumped at the chance to criticise not only Kate and her clothing choices, but how the Daily Mail pulled together the sums of her wardrobe. The popular blog, What Would Kate Do? decided that this was something they could perhaps help with, and have shared their findings with Royal Central. Since January of this year, they have started to keep a tab on all of the new items Kate has added to her wardrobe and worn on public engagements so that they would be able to provide a really good sense of how much she actually spent, the breakdown of items as well as the types of garments she was adding to her collection.

How much did Kate spend on clothing from January through March 2017? Drum roll, please… 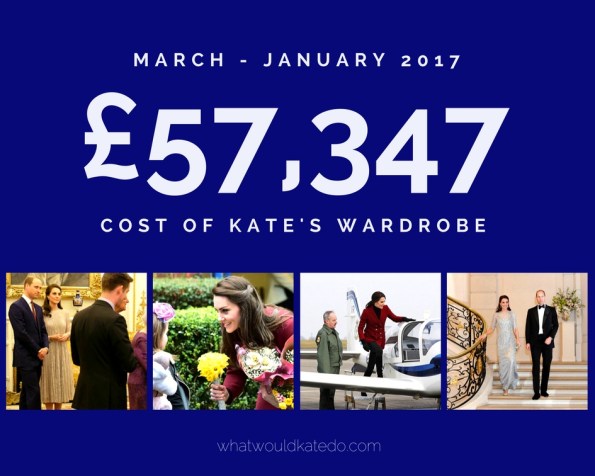 Kate spent £57,347.50 (rounded up for sake of argument) on clothes in the first three months of 2017. This is the equivalent of approximately $71,200 USD – and if she keeps up this “pace”, we will see her surpass last year’s numbers. They anticipate that the spending does continue seeing how she will be taking on additional royal duties this year now that the Cambridge family are relocating to London. Here are all of the items we noted that Kate was wearing new during the first three months of the year, broken down to make that total.

Oscar de la Renta Purple Suit (Retail price $2190 *Assumption* This may have been worn to the Queen’s Christmas Luncheon in December 2016. Because it was not confirmed and there were no photos, we are assuming this to be new for the purposes of these calculations)

Rebecca Taylor Cropped Tweed Jacket (Retail price $495)
Rebecca Taylor Tweed Dress (Retail price $800 *Assumption* There was no matching dress ever located. Best guesses are that this piece is a skirt that was cut from a dress, or that it was custom made. We are assuming the price of a dress which would need alterations.)

WWKD did not include the Chanel belt separately (it was figured into the cost of the Chanel coat), the pearl necklace set worn in France (we assumed it was part of the set with the earrings Kate has previously worn in other years) or the green lace dress from the NPG Gala (Kate had previously worn it to a private event in previous year which we had peeks at).

Let us know your thoughts in the comments. Should the Duchess of Cambridge cut back on her spending or is the overall affect good for the British economy?