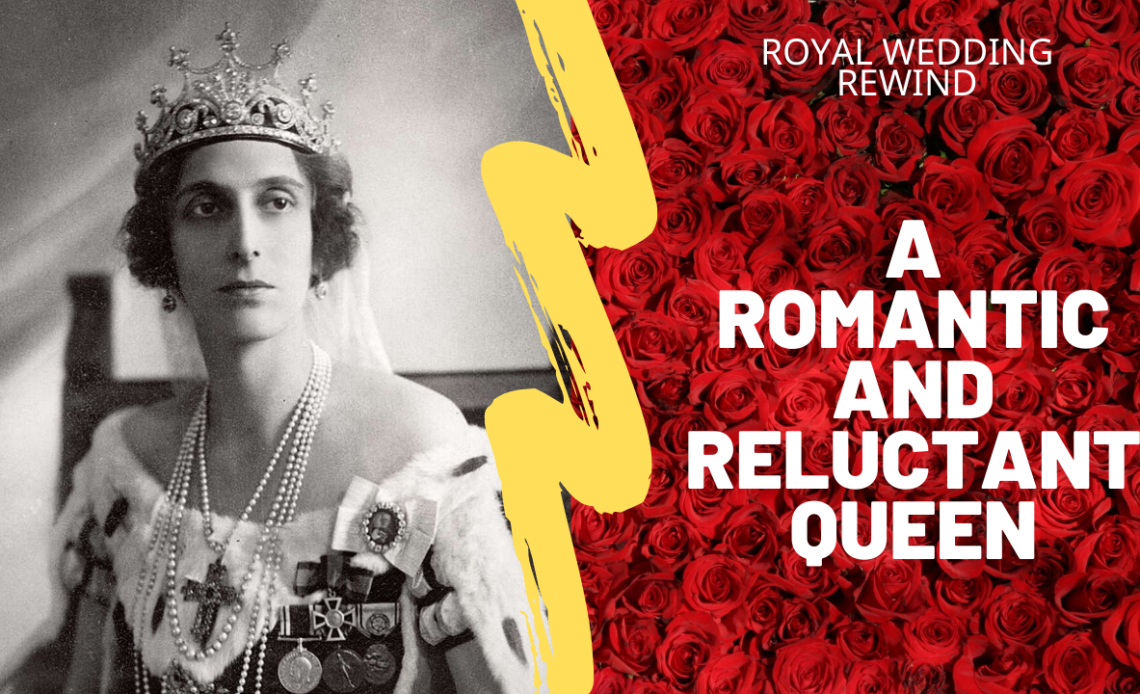 The year 1923 saw the marital calendar was packed with princely nuptials. The springtime wedding of Albert, Duke of York had brought huge crowds to London, and there was an impressive turnout in the city that autumn when Lady Louise Mountbatten wed Crown Prince Gustaf Adolf of Sweden and began a path that would lead to a crown.

This second royal wedding of 1923 was a happy ending for a heartbroken groom and a groundbreaking bride. Louise had been talked about as a match for several high profile royal rulers but had always insisted she would marry for love. She had enjoyed a series of relationships but had been forced to end several of them through family pressures. She had also vowed never to marry ‘a king or a widower’, but in the end, she did both. However, this broken promise didn’t really matter to her for this marriage was far more than a dynastic dream, it was a romantic match on both sides.

Her husband to be, first in line to the throne of Sweden, was perhaps as surprised at this new love story as Louise herself. Gustaf Adolf had married Princess Margaret of Connaught in 1905, and the couple had been extremely happy together. However, in 1920, Margaret had died while pregnant with the couple’s sixth child. Gustaf Adolf was devastated by her death. However, in the summer of 1923, he visited London and found himself falling in love with Louise. The couple announced their engagement on July 1st that year and began to plan their wedding.

There was, however, one rather major matter to get out of the way first. Some people in Sweden argued that the bride, a great granddaughter of Queen Victoria, wasn’t really royal enough to wed their future king. Until 1917, when George V renounced all German titles on his own and his family’s behalf, she had been Princess Louise of Battenberg, but now she was simply the daughter of a marquess. After lengthy arguments and debates, it was decided that the Crown Prince’s fiancee did fit the constitutional bill, and the wedding date was set for November.

The marriage took place at the Chapel Royal of St James’s Palace, London on November 3rd 1923. It was a relatively small wedding although the pews were packed with royal guests. The groom’s father, King Gustaf V of Sweden, was in attendance as were King George V and Queen Mary along with Queen Alexandra. The bride’s father had died several years before her marriage, and so she arrived at the ceremony with her brother, George, Marquess of Milford Haven, while waiting inside were her mother, Victoria, her other brother, Louis, and her sister, Alice.

This royal bride wore silver. Louise’s dress, very much a 1920s design, was made of Indian silver gauze and featured a square neckline and dropped waist giving way to a long skirt and wide train. But alongside this very modern dress was an heirloom filled with sentiment for Louise’s wedding veil had once belonged to the maternal grandmother she had never known, Princess Alice. The piece of Honiton lace had been presented to Alice by her own mother, Queen Victoria. It took on special significance for Alice’s family following her early death in 1878 and Louise’s own mother, Victoria, had worn it at her marriage in memory of her lost mama. Now it provided a link for a 20th century royal bride with several of her beloved relatives.

It was held in place with a rather unusual headdress. Like many royal brides of her time, Louise didn’t wear a tiara instead choosing to put flowers in her hair for her big day. However, she chose to have the orange blossom buds she wore woven into an intricate design which resembled a tiara and which towered above the Honiton lace and silver gauze of her outfit. She carried a large bouquet of lily of the valley, a favourite flower among royal brides which denotes a return to happiness in the language of flowers so beloved of Louise’s great grandmother, Queen Victoria.

Following Louise down the aisle were six of her seven nephews and nieces. Four-year-old David Mountbatten and his five-year-old sister, Tatiana, carried the bride’s train as she made her entrance into the chapel on the arm of their father, George. Following them were the four daughters of Louise’s sister, Alice, better known at the time as Princess Andrew of Greece. Margarita, then 18, was accompanied by 17-year-old Theodora, 12-year-old Cecilie and Sophie, aged nine, on the walk down the short aisle in St James’s Palace. Louise’s other nephew, Philip, was just two and too young to take part in this royal wedding. The bridesmaids were dressed in peach while the pageboy wore a sailor suit.

The ceremony, conducted by the Archbishop of Canterbury, was followed by a procession back to Kensington Palace. For while the wedding was relatively small by royal standards, the couple had attracted big crowds and they were cheered back to their reception which was attended by their close family as well as the extended House of Windsor, among them Albert and Elizabeth, Duke and Duchess of York, who had starred in the year’s earlier royal wedding.

Gustaf Adolf and Louise, now Crown Prince and Princess of Sweden, headed off on honeymoon shortly afterwards before returning to Stockholm to begin their new lives together. Louise became a stepmother to her new husband’s five children, but her only child, a daughter, was stillborn in 1925.

Louise became a popular member of the Swedish Royal Family and quickly took on a wide range of patronages and engagements including overseas tours. She was a moderniser, speaking out in defence of equality between the sexes, and during World War Two she worked with the Red Cross and set up homes for children affected by the conflict. Her forward thinking ways continued after her husband became King of Sweden in 1950 with his new queen ending formal court presentations and updating the regal residences. She died in 1965 and is now buried at Solna, alongside her husband and his first wife.

Louise’s life as queen consort was unexpected and would never have happened if the king in question hadn’t also been the man she had fallen in love with. Behind the formal portraits of that second royal wedding of 1923 was a romance that would stand the test of time and provide two independent, forward thinking royals with a lifetime of happiness and comfort.