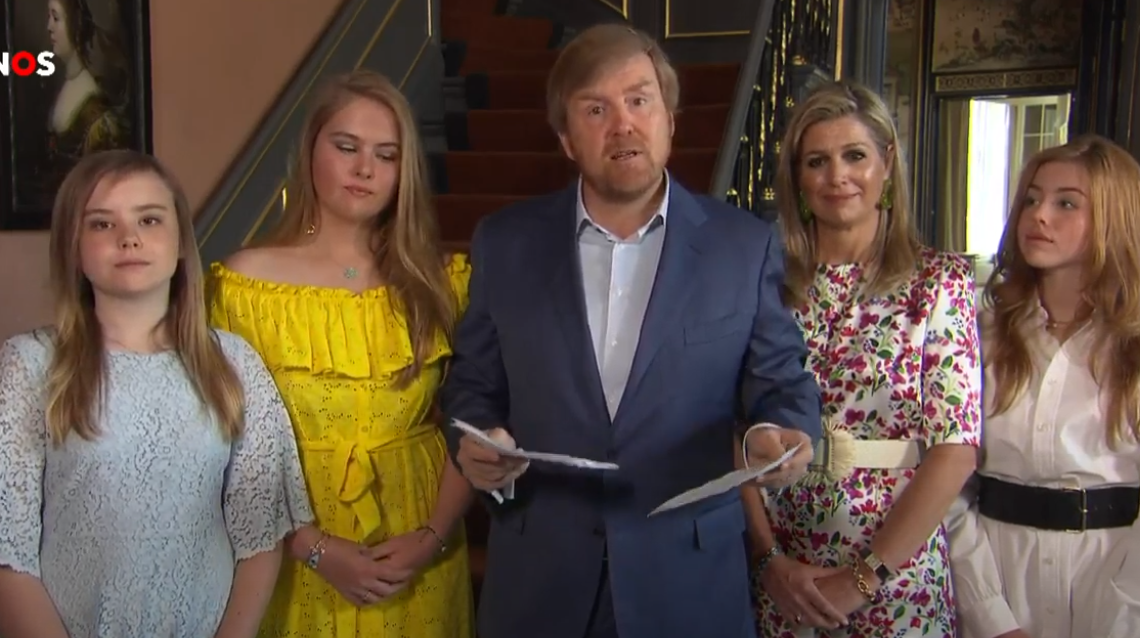 King Willem-Alexander opened his live-streamed birthday speech by thanking the orchestra that played the Dutch national anthem just before. He was joined by his wife Queen Máxima and their three daughters, The Princess of Orange, Princess Alexia and Princess Ariane.

He said, “How special it is that we have managed, despite social distancing, to form a unity and to be an example for many so they may sing-along all throughout the country. King’s Day at home promises to be one of a kind, mostly because I hope it will be the very last time we have to celebrate it at home.

“Try to make the most of it so that you will always remember how you spent this day at home, but still together. This has been made possible by Koningsdagthuis.nl, which will upload the activities you do and show them. I want to thank all those who worked so hard to put this website up in such a short time. Without you, this King’s Day at home would have had a lot less of the “we-feeling”.

“Of course, we would have preferred to have spent the day with the family in Maastricht. For many months, people had been working on a very special programme, and I want to thank them as well, for all the work that had already gone into organising it before the sad but inevitable news came that King’s Day would have to be cancelled. But something that is good and well preserved will not lose its value, and we have already taken “Dear Maastricht” into our hearts.

“Like every year, I had been looking forward to images of canals, squares, streets and fairs. Huge amounts of people out and about in villages, cities, and the pure white beaches of the Caribean parts of the Kingdom – the Netherlands going crazy – exuberant partying. One of those days where “just act normal that is crazy enough” does not matter for the otherwise down-to-earth Dutch people. But it was not to be.

“I can imagine that many of you hoped for more freedom of movement after tomorrow. Even in my family, the disappointment was tangible. But the Coronavirus will not be taught a lesson. So, hang in there, even after this King’s Day. We do it for ourselves but also to protect the vulnerable people in our society. And to give our healthcare professionals some rest, after many weeks of hard work. Rest they have deserved, to recover and to get ready to perform those tasks that had to be delayed. And also, in case the virus rears its head again, and hospitals fill up with COVID-19 patients again.

“Today, our thoughts are also with those healthcare professionals who are fighting against Corona and don’t have the time to celebrate King’s Day. Thank you for your immense dedication and perseverance. In March, we showed our appreciation by going onto the streets and balcony and clapping for them. Now we can show our respect by hanging in there. Do it for yourself and do it for them.

“And now it’s time to party. King’s Day at home – hopefully, an unforgettable day. Enjoy it, from a distance, but together. And stay healthy.”