Archduke Karl of Austria describes Brexit as a “reality show”

The Archduke of Austria, Karl von Habsburg, has described Brexit as a “reality show”. He made the comments in a speech following his re-election as leader of the International Paneuropean Union, the oldest of the current organisations in the world promoting unity across the continent. He won the leadership contest with 100% of the votes.

Archduke Karl said he was grateful for the renewed trust and went on to speak to the movement about his thoughts on the current European political situation. Karl von Habsburg said: “It’s only a week before Brexit, and still nothing is decided. Brexit shows that there is no alternative to Europe, the EU is committed to success”.

The Archduke stated: “The world and Europe are in turmoil, on the one hand because of the unclear circumstances caused by Brexit and on the other because of the populism that is rampant in many countries of the Union”. 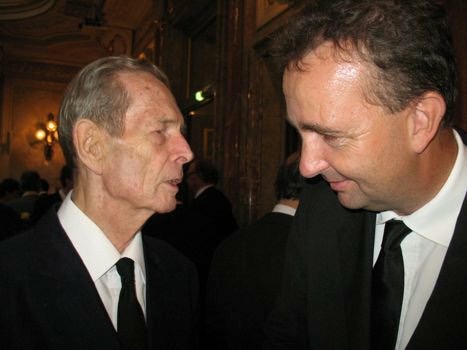 His Majesty King Michael I of Romania together Archduke Karl of Austria at the funeral of Crown Prince Otto of Austria who was the first cousin of King Michael’s wife Queen Anne. Photo: HertigAvRomanjie via Wikimedia Commons.

The International Paneuropean Union is the oldest European unification movement. It began with the publishing of Count Richard von Coudenhove-Kalergi’s manifesto Paneuropa in 1923, which presented the idea of a unified European State. Archduke Karl`s father, Crown Prince Otto von Habsburg led the international organisation from 1973 to 2004.

Archduke Karl of Austria is the grandson of the last Austrian emperor. Today, he is the President of the Pan-European movement, as well as the pretender to the Austro-Hungarian throne and a former member of the European Parliament.

He is also referred to by his ancestral titles as Royal Prince of Hungary, Bohemia and Croatia. He is the current head of the House of Habsburg-Lorraine which ruled the lands of the Habsburg monarchy, the Empire of Austria, the Austro-Hungarian Monarchy, and the Kingdom of Hungary as well as the crown lands of Bohemia and Croatia by hereditary right until the end of World War I.